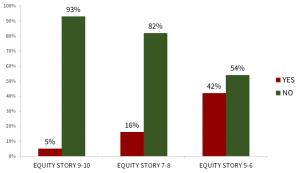 Overall the grades on Equity story 2015 improved over 2014, but comments from sell side show that there is still a lot to improve. 1 of 5 companies receive a grade lower than 7, and the same ratio, only 1 of 5 receive top grades.

As the equity story has such a direct impact on the information discount it is crucial that it creates an impelling and clearly understandable and believable picture. In this picture there has to be openness, clarity, trust and education about both the company and the market/sector including the competitive landscape. 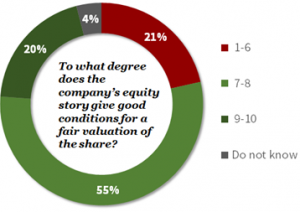 Breaking it up in parts

The equity story is complex, detailed and takes time to understand. And before you understand something, how can you believe in it? Details and facts doesn’t’ necessarily clarify the picture, they may just as well make it more complex and difficult. To hopefully get some clarity and deeper insights we decided to break up the Equity story into six concrete parts. 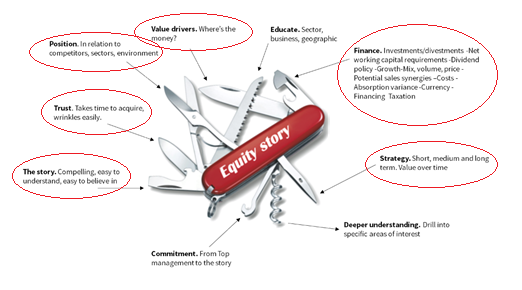 Never underestimate the value of a good story

It goes without saying that all parts are important. The parts make up the complete picture. But same as with all communication, we don’t control what picture the recipient get in his or her head. And without proper context, numbers and facts become obscured as it becomes too difficult to understand how they impact and work together (try putting together an engine without the blueprint).

When asking sell side about importance of the parts Trust is number one, but closely after comes “The story”. It is actually as important as the company’s strategy and more important than finance and value drivers. As much as we all appreciate a good story, it is not that simple. The reality is that the story easily gets clogged and complicated with facts, figures and details that are squeezed into it. The story’s main objective is to be the spine of the Equity story and as such it also needs to be intriguing and believable, and still not get “lost in translation”. 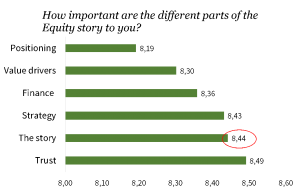 When talking to analysts we listened to them say that companies suffered from unclear positioning and therefore unfairly got affected by macro economical situations that shouldn’t be a major issue. Or that the equity stories too often were complicated and tangled which made it difficult to understand synergies and value drivers or even to actually believe in the story. Comments also showed a wish for clarity on where the company was going. Where will the company be in 5-10 years, and how are today’s and tomorrow’s actions contributing to that?

What needs to be strengthened?

IRNM 2015 shows that close to half of the respondents that put a low grade on the equity story want strategy and value drivers to be strengthened, or maybe we should interpret this as clarified? 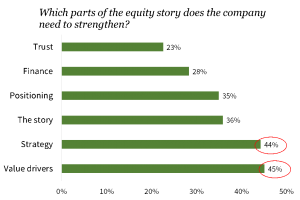 With the story and positioning coming right after, and in the light of the story being the second most important part of the equity story (previous chart) it might be a situation where the three pieces need to be better molded together. If the strategy presented doesn’t align with the story it becomes confusing and if the value drivers are unclear because of this they might become… less valuable. To shed more light on the equity story we have looked at the analysts’ grades and comments and following hereafter are some insights about the different parts of the equity story:

Much in line with the grades there are many comments about the equity stories being too complicated, and not that easy to understand. It is clear that while there is a lot of attention and clarification about value drivers and strategy, the story itself is possibly at times overlooked. And maybe the general short term focus on quarter end results takes away from seeing the whole picture and a longer perspective. In the end, regardless of what story the company puts out, it will be interpreted and retold over and over and during this process influenced by people, press and many other factors outside the company’s reach and control. The more complicated a story- the easier to misunderstand.

“The story is not too easy to understand, you have to listen to it carefully. Others see this as difficult, but they don’t simplify the story.”

“Needs to simplify. Too much “management consultant slides”. Needs to be “dummed down”. Must look simpler.”

“Their equity story is very clear but I feel like the market doesn´t feel the same.”

Two things stand out from data and comments:

1. The story is not that easy to understand and understanding is a must to create belief.

2. Where is the company going? Too much short term focus which creates uncertainty about the future.

In IRNM 2014 almost every comment about CMD had the word “strategy” in it. Explaining, clarifying, renewing, updating and validating the strategy. Strategy seems to be a suitable mantra for top management and typically the company’s strategy is interpreted as the CEO’s strategy even though it naturally is a brew made from many ingredients. Regardless, this brew needs to be clear, concise and credible.

Despite strategy being top of the list, it is striking how many comments that mention an unclear strategy or that a new strategy is needed.

The strategy should leave little or preferably no room for more than one interpretation. And that means having a strategy that is crystal clear in every situation, and in every language it is explained in.  Another area where “lost in translation” could mean great implications as well as costs.

Not too remote from the actual story we see that there is often uncertainty about the business model. Couple this to lack of transparency and there is a lot of uncertainty in what drives the value. When we looked at the CMD in IRNM 2014 we clearly identified “education about the company” as one major reason for a CMD. The companies that got high CMD grades had frequent CMDs and often had different CMD themes to give deeper insight into new areas of the business. This is important to explain and prove how the value drivers work. Understanding what the value drivers are is probably not the problem, rather to understand how they work and create the belief that they will work because of how they work.

When reading through comments about value drivers it is clear that these things complicate understanding the full value of companies’ value drivers.

Positioning is a big issue and it is often mentioned in interviews with analysts. Sometimes a company’s positioning, in the minds of the market and its consumers, differs from the company’s own view. In the worst situations we have seen companies where the market considers them evil when in reality they are doing good things.

“They are explaining the pricing of contracts on volume growth but not very much on price growth or price pressure within contracts. Their whole sector need to address this more.”

“Be more coordinated with how the market is in relation to market outlook for their business.”

“Their strategic position is not optimal for current market position.”

“The wider market are less aware how well the product they are delivering is regarded by its customers.”

An unclear positioning may cause macroeconomics to have an erroneous impact on how it affects the share. It is very wise to measure the “market positioning temperature” often, especially if the company has gone through major or many changes in a short period of time.

It might even be difficult for analysts that have been following the company since “the old days” to see and understand today’s company fully.

We don’t have to explain the importance and necessity of trust. Instead we want to raise the fact that we yearly see comments that most likely are costing the companies a lot because of lowered trust.

There are two major reoccurring subjects:

Despite the company’s (in many cases) internal opinion that top management is very available this remains a split view. In our data we see a very different tone in availability comments if we compare individual meetings or one-on-ones with availability related to AR or QR reporting.

Comments about trust that are a bit harsher mentions management’s need to be better prepared for investor meetings, answering in an avoiding manor and any mention of a “black box” in the business model is not building trust. For most companies, this is not the situation. But for the ones that these type of comments relate to, it is probably very costly.

At this point the importance of correct, and effect of, erroneous guidance is worth mentioning. We yearly see many comments about guidance and how being continuously too optimistic or too conservative both affect the company’s trust. Correct guidance is of course very difficult, but if the company has had a long period of either too optimistic or too conservative guidance, it might be worthwhile evaluating this going forward. An adjustment will most likely have an effect on the market. But thereafter the company might easier avoid to repeatedly disappoint the market.

It is a difficult area since it varies widely between companies, sectors and countries. And with the ongoing changes in reporting structures, needs will change too.

The things that stand out regarding cost, margins and profit per unit have been mentioned before. Segment reporting, clarity about working capital and aligning to competitors’ reporting structure is seen in comments. The latter is mentioned especially when these are located in other parts of the world. It all relates to openness, transparency and more details, something that often is close to impossible to provide for competitive or other reasons.

The companies’ reporting is very extensive and what will enhance one reports usability might have no improvement effect on the other. From what we can see in the study, other areas will have a greater impact on improving the equity story.

So, how about rebuilding that engine now and then?

In the beginning we made the comparison about building an engine without the blueprint.

The reality is that companies are rebuilding that engine every day in investor and analyst meetings, on their websites, at conferences and during CMDs and basically in every contact with the financial market. Every time the equity story is communicated that engine is being built. So how about making sure that the blueprint is spotless? When we asked the IROs themselves how often their companies equity story is updated or reworked it showed a vast spread in continuity, from every three months up to every five years or more. And the scary part? 18% of the IROs didn’t even know if their equity story got updated often enough. 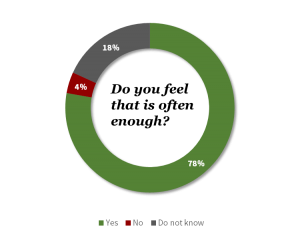 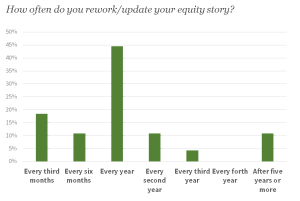 If you want to find out more about your company’s Equity story and see how it compares to others, don’t hesitate to contact us: johan.chasseur@regi.se